It is so funny what a little encouragement can mean for someone. Today I was notified by one of my “Linked” connections that they’d just endorsed me for Content Development. I needed that! As I am finishing my book and as you know, have gotten side-tracked so many times before. I felt that it was almost as if God Himself used (Stefan Maxima)  😉 as HIS vessel to get the message to me to keep going! Though of course I know that we randomly endorse each other as we are on linked and I am sure it was not a specific endorsment that was being selected because of my brilliance  🙂  but it was just that push that I needed.

When I first created this blog, it started out as just a place to write my book that I’d started about a year earlier. Well, I am glad that I got sidetracked because I have been so blessed in the meantime by all of these friendships that I have made with other writers and readers alike. But I feel kind of  like an artist who can never stick to just one project at a time. Do I have ADD? Or am I just creative? When I was self-employed as an artist, I had several projects going at once. Every artist friend I have known has copped to the same crime.  Our art studios have never been very organized. We are not very focused! Or maybe too focused on too many things! But we are definitely not as organized as any of us would like to be! If we were, our art studios would not look like this! (though some are a little more organized than others, we have decided that a true artist has messy art rooms period.) The level of messiness may be indicative of the greater level of creativity…. or not! But it would be nice to believe that! Right? 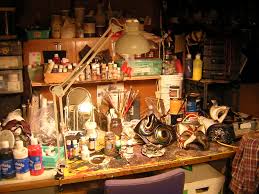 Though, as you can see here, there are the few weird ones who are actually very creative and talented and organized! They must have issues! 😉

Soooo anywaaay these are either staged photos or… it IS possible! Though I think that I land somewhere in the middle.

Here is a prime example! I know that I should be just writing my book…. but here I am again needing to touch base with my blogging world even though I am at a place of really being on a roll in what I would call content development! Finally! Exactly what Stephan Maxima endorsed me as being able to do. So do it already I tell myself! Instead I feel the clutter in my head and I just want to sit myself in the corner until I focus! 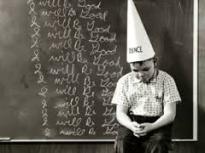 So now I think that I FINALLY  have a frame and something to put in it! After all of those first drafts. I think that I see the light at the end of the tunnel! Though this is all still a very rough draft, I feel that I have grasped where I am going. Can I say finally again? For those of you who have followed my other blog at Keris Journal:

If you care to comment here or…… there>>>> http://kerisjournal.wordpress.com/  I’d be very grateful!

I really was not comfortable sharing this here as my other blog was more ingognito and that was just fine with me. But here it is…

Remember to read this first:

Keri and her daughter Brynne decide to clean out their attic to make a study for Keri to write in and she finds a journal that she kept when she was a teenager. The next chapters are of Keri reading the journal to her daughter Brynne, as they find themselves traveling through a time in Keri’s life that she never talked about with her daughter before. As the journal is read, it takes them on a journey of first love, abuse and heartbreak. As the story comes back to current times, Keri uses her story as an opportunity to guide her young daughter who is close to the same age that Keri was when she began writing in the journal. Though there is a twist that no one expected…. with social media so prevalent, the boy who broke Keri’s heart three decades ago, comes back to apologize. But does he want more than just forgiveness?

To love a pilot, you must learn to F.L.Y.
Tooting Hustle