Old friends across the miles

I still recognize your smiles

wishing nothing but the best

happy times and all the rest

they were the times of our life

How quickly they passed by

We didn’t see it then

And through the magic of the air

We’d find each other there.

When I was little, my dad would send us to Seattle every year to visit our family. It was a promise he made to my mom (to send us there every year) when he moved us away from there when I was very young. A promise that he kept as long as he was alive. I cherished those summers. And then I grew up and for some reason life got in the way and those trips just stopped. For me at least. I had better things to do. Or so I thought. I’d give anything to have those carefree summers back. I think I miss my grandma and my cousin most of all this time of year. That HIGH of seeing each other after a whole  year was the extreme feeling of love. That feeling of really feeling excited to see each other. The best feeling ever!

Today, I work through my summers. The other day I mentioned to my boss (also a good friend) “Just you watch, this week will be over and I will be saying can you believe it’s Friday AGAIN?!” And Friday I asked; “Remember what I said about Fridays?”  It kind of scares me how fast life is passing me by. It seems as if only yesterday, falling in love was just something to look forward to. I hadn’t even kissed a boy yet, didn’t know where I’d end up living, if I’d have kids or who’d they be. OR for that matter, WHO I’d be!  Everything was all tucked inside my imagination. And now I know as if there is nothing left for me to look forward to. Sometimes I have this overwhelming feeling of it all whirling past me so fast that the dread of it all being over has me missing “life” as it is happening.

I used to fly sail planes! Believe it or not. It was kind of a fluke. It was another summer in my life, We’d just hopped on my boyfriend’s motorcycle on a beautiful Saturday afternoon starting out to just take a ride along the cliffs of Palos Verdes and ran into these radio controlled sailplanes and ended up driving all the way to Lake Elsinore to see the real things. Before I knew it we were signed up and taking lessons! I remember my instructor, he was from Scotland, His name was Glen, he’d always greet me with “Top of the morning to ya!” We’d had a T-shirt made for him with that on it when I’d completed my course and began soloing! Can you believe it? I actually soloed. I think it is one of the accomplishments in my life that I am most proud of.

Being able to solo entailed a lot. You needed to know all the technical things as well as understand the way thermals worked and how to share one with another plane, how to be aware of the traffic in the sky etc.. Though my boyfriend soloed before me, I soloed with less trips up or lessons. I think Glen kind of just wanted me to beat my boyfriend who was very competitive. So I proudly raced my way to winning something out of our race! I will never forget that plexiglass dome coming down over me without Glen in the seat behind me! I just kept eyeing that red knob that I was supposed to pull at a certain altitude. 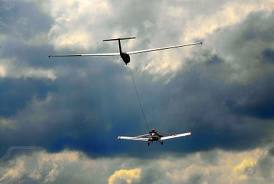 I watched as the power plane pulled me up, and as it hit a little turbulence, I knew I’d hit it a few seconds later. There was a kind of comfort in that tow plane and the turbulence and knowing what was in store.. but finally as we rose to the correct altitude,  the power plane wiggled it’s tail, the sign for me to release! Yikes! I pulled the red knob and watched the power plane flip a U and go back down to pick up his next tow, as this total feeling of dread and exhilaration  filled me. My boyfriend was filming the whole scene below. I found the landing pattern, looked for other air traffic, eyed the chalk line I was supposed to land on, checked my instruments and remembered all the instructions, “Remember your wing span, don’t waver too much or you’ll clip your wing.” I remembered hearing Glen say as he patted my fuselage. Seriously? Did I really need to know that? You better believe it. Eventually, I learned to find thermals and enjoy the ride like I did when Glen was up there with me, instead of just being pulled up only to focus on landing and nothing else! After several solos and some other interesting stories I could tell, I look back on those days fondly but wonder…“Were you crazy Diane?!” (The things we do when we are young!) And yet, it is kind of like life. We need to pull the red knob sometimes and fly over the unexpected turbulence without any forewarning. To adjust and land. To always land. Yes life is like that, summers come and go, weeks speed by, but we need to stop worrying about pulling that red knob and enjoy the trip both up and down and have faith in our ability to land but to not miss the thermals along the way! Because it actually is about how long you can stay up, catching those thermals and not worrying about the turbulence or always landing so fast!

*Post Note (A friend asked me to write about my Glider days… so I did… >>>>By the way…. This one’s for you: Paywindow7 (Bob) Now you need to write another!) https://paywindow7.wordpress.com/ 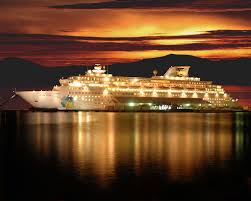 All of our lives we try to fill that place inside

where we go to find our joy.

We go on trips and take vacations and make memories…

I’ve found a place inside of me where I can finally go,

where my heart has caught up with my head

and learned  things that it should know

I’ve finally filled the holes inside

with things I’ve learned will stick

not the obviously fancy things

that make me feel full quick

If you took all the pictures

away from the words I write

If you closed your eyes…