We have a local site with someone who anonymously keeps us updated on all of the local emergency occurrences  happening in our area via his Facebook page, which I followed since I drive over 50 miles a day, to and from work, and his traffic information seems to be the most up to date. Sadly his recent reports have been on a few local accidents that have occurred on our local train tracks. Even sadder, they seem to not be accidents but suicides.

I try not to get sucked into the comment threads, because at times they are so frustrating and can make you look pathetic, wasting even one minute arguing with a stranger, though as a writer that some might describe as opinionated, I can never keep my mouth shut when it comes to the above subject.

When I was a young girl my boyfriend’s mom killed herself. She’d attempted it a few times before that, but succeeded when we were dating. It was one of the most horrific of experiences I’ve ever lived through. And I have never really been able to describe the pain she left behind.

I sincerely believe that if she’d received the right kind of help she would still be here. She was vivacious and funny, smart and beautiful and one of the most generous people I’ve ever met. Everyone loved her. She was a mother, a wife, my boss, and one of my best friends. It happened around this time of year many decades ago, and it still affects me as if it were yesterday. Statistics say that this is a high suicide time of year. And our census was usually up during the holidays at the hospital where I worked many years ago.

I believe that her pain was real. I believe that she was chemically imbalanced and that her issues were organic. And I believe that she could have been helped. I also believe that I was far too young and inexperienced as was my boyfriend to be held responsible for not knowing how to help her. And yet I think that because we couldn’t, it affected us both in ways that we still are dealing with in our own separate lives today. So yeah, I do believe that when someone kills themselves it is no just about them. Having said that, I believe that this woman that I loved, that might have been my children’s grandmother, missed a whole half of her life, I know that she missed weddings, celebrations, births and probably deaths and sadness too. But her life was far from over.

Today I was very disturbed by the comments that a few particular people made defending suicide saying that some people just don’t want help and not condoning it, but making it almost okay and defending the act. It is not okay. The next comment was…. “It’s not about you.” You wanna bet? It’s about everyone involved. And it is something that lives with you forever after. Always asking what could we have done? Even over thirty years later.

My childhood best friend just died of cancer last year. She fought to save her life for twenty years. She did everything she could to fight. She finally didn’t have a choice. I understand that depression is a disease. I understand because I have it. But don’t tell me that it is okay not to fight for life! You do have a choice.

The way that conversation was going could make somebody feel that it was okay not to fight, that if your pain is so great, go ahead and jump in front of a train and maybe kill some people in your wake, don’t think about the people who will have to clean the blood off of the tracks or the conductor who couldn’t stop in time. Suicide is one of the most selfish acts anyone can do. And they may be fighting words for some, but I will never change my opinion. No matter how you do it, Somebody has to find you. And most likely it will be someone who loves you.

And so Yeah, I still believe that… Suicide is not the answer and I won’t be a part of ever saying that sometimes the pain may be too great. Perhaps it is for that day, maybe even for several days. But it will get better. I am proof. I have been pretty wasted in the toxic wave of my own depression. To the point of not wanting to go on. But I believed in something greater than my own pain.

Don’t give up today because the sun really will come out again and though you will still have your happy and sad days, you won’t miss the happy ones when you finally decide that…  Tomorrow IS always the ANSWER! 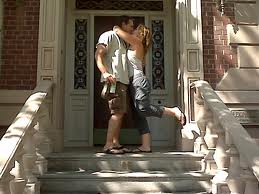 The future is exciting. Always believe that something wonderful is going to happen.

30 thoughts on “Tomorrow IS the Answer!”

The Writer Next Door